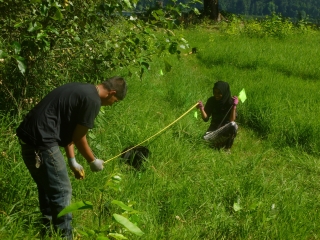 Urban forests—and urban forestry—can play a key role in addressing some of the central challenges facing urban regions, such as climate change, education and youth engagement, the rising costs for health care, and wastewater management. Addressing these issues requires new partnerships and new approaches. This project undertakes to substantially broaden the constituency for and relevancy of urban forestry and elevate it in the eyes of policymakers and the public.

Across the region, urban forests are estimated to contain about 6.9 million trees with an estimated structural asset value of $4.3 billion. Beyond aesthetics, urban forests also provide innumerable other services that affect both the local physical environment and the social environment in the places we live, work, learn and play including:

Air quality –Trees trap and filter harmful emissions and pollutants by exchanging gases with the atmosphere and capturing particulates such as ozone and carbon monoxide in their leaves.

Water quality and flow –It is estimated that 100 mature trees intercept about 250,000 gallons of rainwater per year, reducing stormwater run-off and providing clean water.

Wildlife habitat and biodiversity – The urban forest provide shelter and food for a variety of birds and animals, increasing the biodiversity of urban natural systems. 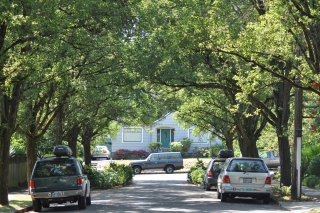 Regional tourism - Trees contribute to regional tourism, boosting visitation to many of the region’s most popular natural attractions.

Community well-being and involvement –Trees and landscaping create pedestrian-friendly streets, increasing the attractiveness of walking and active living, and have even been shown to lower crime primarily by bringing people together outdoors, increasing surveillance and discouraging criminal activity. 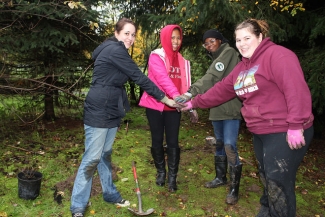 In the Spotlight: INTERTWINE PLANT OFF

With the support of these 10 public, private and nonprofit organizations, two teams of racially diverse youth organized, promoted and led tree planting events in their communities on Nov. 1, 2014.

The youth participated in a series of workshops where they learned the importance of trees to watersheds, developed a plan for their planting sites, worked with a marketing and public relations firm to produce and implement an advertising campaign, served as leaders of the planting events, and reported their results at a conference of more than 200 conservation leaders.

The events helped kick off a campaign called Tree for All that planted more than 1 million native trees and shrubs in a year. As part of this project, more than 16,000 trees were planted on almost 12 acres. The youth were able to attract a much more diverse group of participants than similar events in the past and for many participants this was their first conservation-oriented event ever. 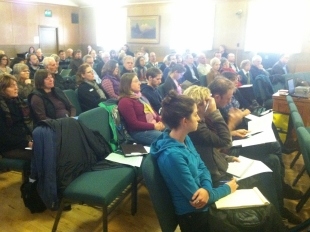 More than 80 people gathered in Tualatin on Nov. 18, 2014, for the Urban Forestry Summit, an Intertwine Alliance event led by Tualatin Riverkeepers, the Oregon Department of Forestry and arborists Teragan and Associates.

A portion of the discussion was about the new urban forestry code that had been recently adopted by the City of Tigard, which prevents clearing before development and encourages steady growth of tree canopy in the city. To read notes about the full range of challenges discussed, along with the solutions offered, click here.

You can also read "Urban Forest Fire," a piece that Brian Wegener of Tualatin Riverkeepers wrote about his takeaways from the summit, in the Outside Voice blog.

The Urban Forestry Un-Forum is an opportunity to brainstorm with urban forestry colleagues, taking a deeper dive into the unique issues surrounding urban forestry and their connection to other region-wide opportunities and challenges.

Instead of talking heads, this is a chance for you to set the agenda, and to engage the brainpower in the room to get input, ideas and potential solutions about issues that are important to you. Submit discussion ideas by Monday, Nov. 2; click here for details.

The Intertwine Alliance's work on urban forestry made possible with a grant from the USDA Forest Service.