Just under the surface 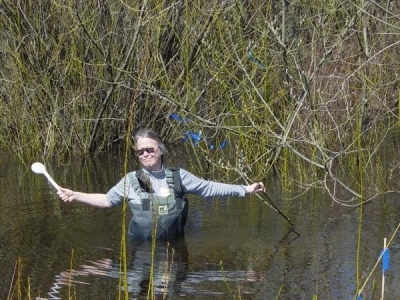 Willingly, and often with big smiles, these dedicated folks suit up in chest waders and step into chilly February ponds in search of jelly-like amphibian egg masses.

They use bamboo poles to mark egg masses, carry white spatulas to better spot the masses and – often at the same time – manage kayaking equipment.

They search in particular for the egg masses of Northern red-legged frogs, which are listed as sensitive species whose numbers are in decline. The monitors also track Northwestern salamanders, long-toed salamanders and Pacific chorus frog – and invasive American bullfrogs. By tracking the numbers and locations of these key amphibian species, scientists can gauge the effectiveness of ongoing restoration projects. 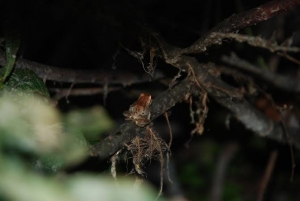 In the past decade, Metro has initiated several restoration projects in floodplains, including one at Multnomah Channel Marsh near Forest Park.

An amphibian monitoring program began at the site in 2002. At the time, the historic wetland had been cleared, graded and planned for development, leaving only two small beaver ponds as crucial habitat for red-legged frogs and other amphibians to breed.

Scientists restored the natural flooding on the site. Wetland habitat increased from about four acres to well over 100 acres, creating large areas of new habitat for pond-breeding amphibians and other native wildlife. 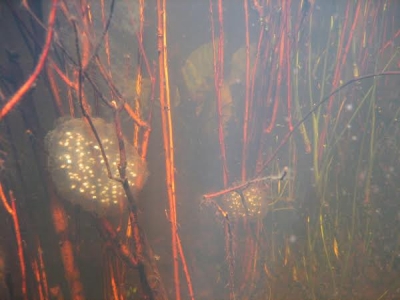 Over the past decade, red-legged frogs and other amphibians expanded into most of the new wetlands and now breed at many locations. One year we counted over 370 frog egg masses. Since each egg mass can hold as many as 850 eggs, that’s a lot of frogs! Of course, not all of the eggs develop into adult frogs (native predators need food, too).

An interesting benefit came from our frog study there. Northern red-legged frog tadpoles go through metamorphosis as late as June, meaning they need water relatively late in the season to survive. By managing the wetlands to hold more water for longer, we found that this did wonders to eliminate invasive reed canary grass. Now we see far more native rushes and sedges, which makes everybody happy (well, perhaps not the invasive grasses). 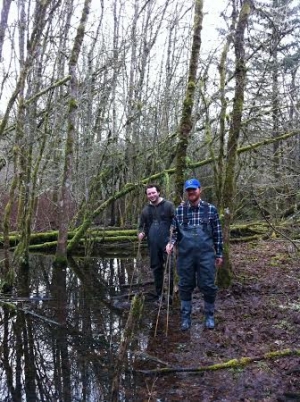 Over the past 12 years, we have monitored over 27 natural areas for amphibians – all sites that were either undergoing or about to undergo restoration. These natural areas are often located next to corporate parks, industrial areas and residential neighborhoods.

It has always been magical for me to see our volunteers “suit up” in the corporate parking lots next door, donning chest waders and heading off into the woods with paddles under one arm and large bamboo poles in the other.

It’s a wonderful sight and affirms, once again, just how amazing our volunteers are: heroes who help us to better love and protect The Intertwine's interconnected pockets of urban wilderness, each bursting with life if you look just under the surface!

Katy Weil has worked in wildlife conservation for 32 years. She currently works at Metro in the Natural Areas Program, which focuses upon the restoration of wetlands, uplands and river habitats. Katy has a background in wildlife biology, particularly wildlife field study. Her background as a Pacific Northwest flight instructor allows her a bird’s eye view of the region’s greenspaces. In her spare time, Katy is a happy bird geek, and very thankful that her 8-year-old son shares her love of birds and natural places.