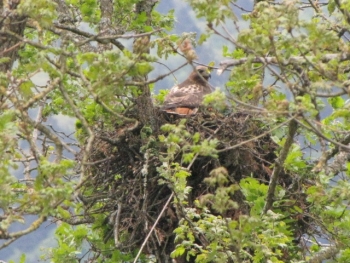 This spring, I followed a pair of red-tailed hawks, courting in the updrafts, and found their nesting site perched in a narrow ribbon of oak habitat between the noise of industry and traffic.

Early on, the incubating female discouraged my loitering with sharp calls to her mate in a nearby tree. Both would take flight and hover menacingly if I was too close. In late spring, just before the trees leafed out, the mother spent more time on the edge of her nest than within it. I finally spotted a fluff of white, and the calls turned around that of a hungry little voice. Just before the nest emptied, I accounted for a healthy family of three as the youngest strengthened its wings in practice flights. 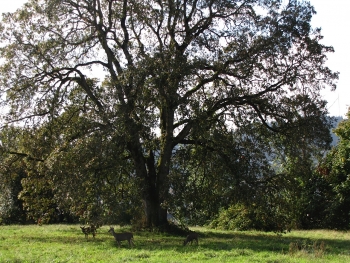 Certain things choose us more than we choose them. That is how it has worked with Friends of Overlook Bluff, stewards of this fringe of oak and madrone trees that hems the east side of the Willamette as the river’s north reach winds toward its confluence with the Columbia. This route is a gift for walkers, bikers and runners who call North Portland home. It is the only potential sliver of continuous woodlands on the east side left to reclaim, and its ecological significance is irreplaceable.

Historically, white oak savannahs provided hunting and camping grounds along the river. Settlers found these paths useful as trade routes. Trade made way to travel, and the path widened into its familiar incarnation: Interstate-5. Riparian corridors like these are vital to the food chain of over 200 birds and animals. As a migratory route, oak savannahs have traditionally run from Canada to California.

The corridor of urban wilderness to which Overlook Bluff belongs mesmerizes year-round. The deep blue greens of oak leaves in summer, the gray brown gnarl of their trunks and branches in winter. Blown and drenched free of leaves in the fall, rust-color madrone bark reveals itself amidst the oaks. In early spring mornings the darkness lifts, the rains hold off, and nature wakes up. 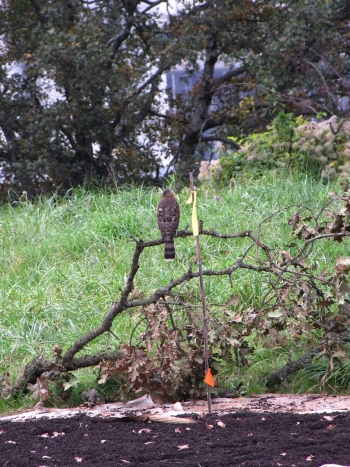 We wake up more each year to the significance of our surroundings, and how we might care for it. There is much to steward; Friends of Overlook Bluff inherited a legacy to protect. A Heritage Oregon white oak tree believed to be 150 years old stands alone on an open meadow overlooking the train yards, river, downtown and Forest Park.

The Friends implement hand-managed oak meadowscaping, native plantings, invasive species removal, and work to raise community awareness of local ecology with speaking events and native plant sales. With our selection for a 2014 Metro Nature in Neighborhoods capital land grant, we are focusing on fundraising and building partnerships to acquire the property before it is sold for development.*

For now, if you’re afoot at Overlook Bluff, you must navigate fragmented trails that run sometimes within the woodlands, and sometimes along the steep pitch of bluffs above the railroad tracks. Paths do exist: parallel to Willamette Boulevard behind the Adidas campus; down Waud Bluff Trail (the nicely engineered pedestrian entry/exit to Swan Island); below University of Portland; and in Baltimore Woods, which begins just beyond the St. Johns bridge. The goal is to make them continuous. The 40-Mile Loop is slated to stitch adjacent to the fabric of this oak and madrone corridor and may also recognize Overlook's pedestrian potential. 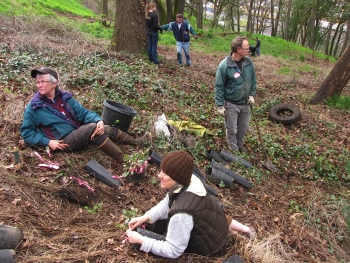 From the hawk's perspective, the connection from St. Johns in deep North Portland to Overlook just north of the Fremont Bridge is apparent. Now, the pieces of this quilt are also being assembled on the ground in North Portland -- neighborhood by neighborhood, mile by mile, loop by loop. To volunteer or find out more about us, please visit www.overlookbluff.org.

* Coalitions of community involvement are a must if cities are to be able to continue to acquire open spaces, and to that end we are working with organizations including Metro, the City of Portland Bureau of Environmental Services, Portland Parks & Recreation, SOLVe, Portland Audubon, the Backyard Habitat Certification Program, Northwest Youth Corps, the Xerces Society, East Multnomah Soil and Water Conservation District, Friends of Baltimore Woods, the Trust for Public Land, and the Columbia Land Trust.

Ruth Oclander founded Friends of Overlook Bluff with her neighbors in 2012. She is an acupuncturist and yoga teacher by trade, and enjoys running trails in Forest Park and traveling to far off countries with her husband and young children. Her mother, an Olmsted, can take credit for dragging Ruth into the woods for hikes when she was growing up and letting the grass be overtaken by trees in a backyard that sloped to meet the state forest.