On Oct. 21, 2015, the Port of Portland donated two wild acres on the northern tip of Ross Island to the City of Portland. The gift marks the latest development in a decades-long movement by partners of The Intertwine Alliance to rebuild and protect the island, a source of sand and gravel for Portland and the metropolitan region since the 1920s. 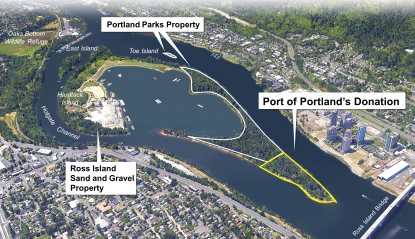 Since 2007, the City of Portland has owned 45 acres of Ross Island upstream from the Port’s land. Stewardship efforts have focused on removal of invasive species and collection of information about plant and animal species through “bioblitzes,” both of which have been a cooperative effort with the Audubon Society of Portland, Willamette Riverkeeper, Portland Parks and Recreation and many volunteers.

The goal of the Port’s donation is to support the city’s overall restoration of Ross Island as a significant resource for fish and wildlife habitat.

“Ross Island is an ecological treasure,” said Mike Abbaté, director of Portland Parks & Recreation. “The Port property transfer adds one more piece to our restoration vision for the island, and our City’s overall park system.” 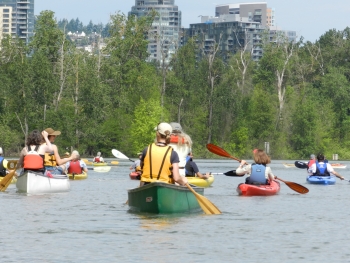 “We are pleased to put this land in the community’s hands,” said Bill Wyatt, executive director of the Port of Portland. “It’s exciting to be part of the broader coalition supporting the restoration of the island.”

Covering about 400 acres, Ross Island is actually four islands. Situated one mile south of downtown Portland and in the middle of the Willamette River, Hardtack, East, Toe and Ross islands are bordered on the west by the South Waterfront development and Willamette Greenway, and on the east by the 160-acre Oaks Bottom Wildlife Refuge and scenic Holgate Channel.

With its colorful and often controversial history, the archipelago is a unique mix of industrial and natural habitats. 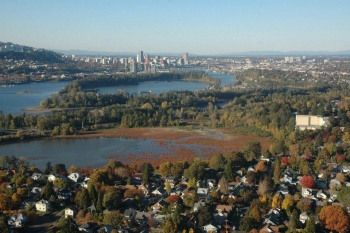 “It’s the city's most iconic scenic landscape,” says Mike Houck, executive director of Urban Greenspaces Institute, Intertwine Alliance board member and leading Ross Island conservationist for the past 40 years. “The islands, particularly when taken with Holgate Channel and adjacent Oaks Bottom Wildlife Refuge, are also an invaluable ecological, recreational and historical resource to the metropolitan region.”

The Ross Island Sand & Gravel Company mined raw material from the islands starting in 1926 to build nearly half of Portland’s buildings, along with its sidewalks, bridges, highways, driveways and homes.

“For more than 80 years,” Houck says, “the islands have contributed to the growth of our city and region. It's time to honor that contribution by permanently protecting and fully restoring this ecological treasure in the heart of the city and, in time, bringing all of the islands into public ownership. By transferring its portion of Ross Island to the city, the Port moves us one step closer to realizing that vision.” 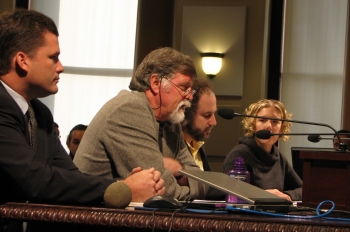 The Port property, located approximately four miles from its marine terminals and zoned for open space and commercial use, was purchased from Multnomah County in 1947 at a public sale for $1,362.97. The landmass was originally described as 4.73 acres but is now estimated at 2.19 due to erosion from the Willamette River. 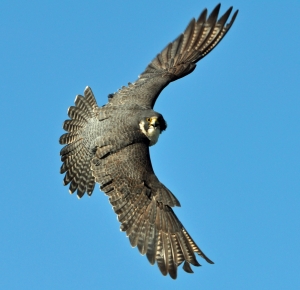 Approachable by boat only, with no bridges reaching it, Ross Island is off limits to public landfall except by volunteer work parties. Portland Parks & Recreation, the Audubon Society of Portland, Willamette Riverkeeper and Urban Greenspaces Institute all host paddle trips around the islands. You can glimpse the archipelago from either side of the Willamette River, from the Willamette Greenway trail to the west or the Springwater on the Willamette recreational trail to the east.

Travis Williams, executive director of Willamette Riverkeeper, has been promoting a vision for Ross Island access for 15 years. “At this point,” he said, “Ross Island is managed as a natural area with limited access for volunteer work parties, per the agreement back in 2007 with Dr. Pamplin. It will likely continue to be managed as a natural area of this kind until such time as a new donation of land takes place, the mitigation work is completed, or the City seeks to renegotiate the agreement.

“In our view,” Williams said, “we might be able to be creative over time with access, such as from a floating dock structure in the lagoon or similar low-impact features.” 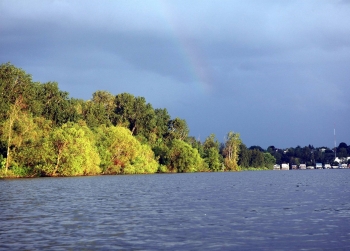 The Portland metro area rests on traditional village sites of the Multnomah, Kathlamet, Clackamas, Chinook, Tualatin Kalapuya, Molalla and many other native tribes. These groups created communities and summer encampments along the Columbia and Willamette rivers, and harvested the plentiful resources of the area for thousands of years. Long before it was claimed for the sand and gravel that built Portland, Ross Island, with its prominent position in the Willamette River, most certainly played a role in Native American life.

Here we focus on the past 100 years, starting with Ross Island’s acquisition for industrial use. 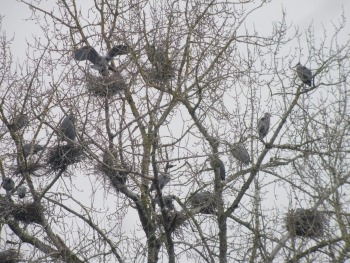 1979 - The Audubon Society of Portland testifies before Portland City Council opposing renewed permits for Ross Island Sand & Gravel to continue mining Ross Island and the lagoon. The Society recommends that, short of denying the permit renewal, the company be required to establish a 350-foot buffer around a 55-nest great blue heron colony on the island. Council approves the permit but also requires the buffer around the heronry, which is today the large forested bulge into Ross Island lagoon where bald eagles nest. Ross Island Sand & Gravel is ordered to install markers on the inside edge of the lagoon to monitor erosion. City Council also requires that land be restored approximately 400 feet across the lagoon, and that the lagoon itself, which had been dredged to a depth of -130 feet, be filled to its original depth of -20 feet. Unfortunately, no end date was established to ensure the restoration would be completed. 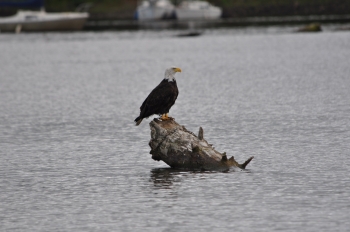 1999 - Officials from Ross Island Sand & Gravel, Portland Mayor Vera Katz and City Commissioner Erik Sten board a tugboat to announce from the lagoon the company’s voluntary decision to end mining — no date given — on Ross Island. Company President Dr. Bob Pamplin Jr. cites tougher protections for endangered salmon as a factor. Mayor Katz says she hopes Ross Island will become a park or a wildlife refuge. Pamplin promises to donate all of Ross Island, along with a portion of Hardtack Island not occupied with the company’s processing plant, to the city as a wildlife refuge.

May 21, 2000 - An Oregonian newspaper article questions the plans: “To restore the island the way the 1979 Reclamation Plan will require, the Division of State Lands estimates, 25 million cubic yards of fill would be needed. ’What’s the city of Portland? Ten square miles?’asked Paul Cleary, division director: ‘That's the entire city covered to a depth of 21/2 feet.’” The story also refers to Ross Island as a “ghost of an island” and a “broken loop of sand.” 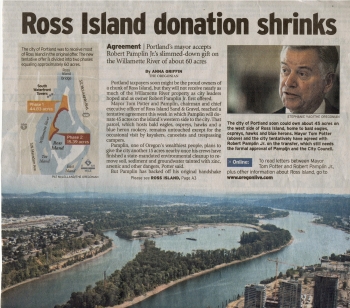 2001-2002 - A six-member advisory committee including Metro Councilor David Bragdon; City Commissioner Erik Sten; Ben Meyer of the National Marine Fisheries Service; Ann Hanus, Director of the Oregon Department of State Lands; Jim Rue representing Ross Island Sand & Gravel; and Urban Greenspaces Institute Executive Director Mike Houck spend 14 months reconsidering the 1979 Reclamation Plan. One of the most significant factors considered, in addition to ecological input from OSU and Portland State University’s Dr. Richard B. Forbes, is the fact that the 1979 reclamation plan had no end-date requirement. Based on updated scientific information, the advisory group recommends that most of the lagoon be left at the 130-foot depth; that shallow water, emergent wetland and riparian habitat be created at the south end of the lagoon; and the remnants of Ross Island be shored up through deposition of fill at its base. In addition to Ross Island Sand & Gravel’s promise to donate all of Ross Island and a portion of Hardtack Island to the city, the new plan requires reclamation be finished by 2013. 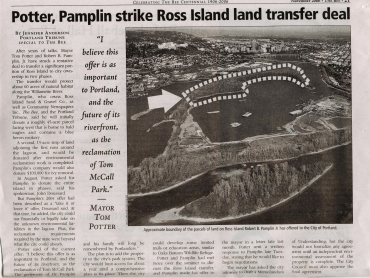 2001 - Mayor Katz refers in her State of the Union address to a new deal with Pamplin for 200 acres of Ross Island. But, according to the Oregonian, “the deal foundered over who exactly would should have liability for cleaning it up.” A deal for 60 acres is then announced in October — but also fails to materialize.

2004 - Ross Island Sand & Gravel ceases mining operations in response to the listing of Chinook salmon and steelhead trout as threatened under the Endangered Species Act, resulting in narrow windows during which the company could operate in the river. Its processing plant, however, is still fully active, turning raw material from sources on the Columbia River into finished product. These activities continue today. 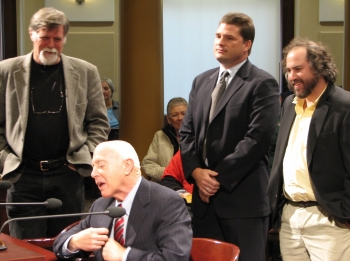 2007 - Houck, Williams and Sallinger meet with Dr. Pamplin — at Dr. Pamplin’s request — to discuss the City-Ross Island Sand & Gravel agreement. Dr. Pamplin then meets with Mayor Tom Potter and Former Mayor Vera Katz in a signing ceremony followed by formal transfer of 45 acres on Ross Island to Portland Parks and Recreation. This, according to the Oregonian, leaves Pamplin still with 350 acres. 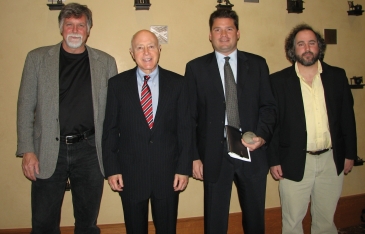 2008-2009 - Audubon Society of Portland, Willamette Riverkeeper and Urban Greenspaces Institute team up with dragon boaters, rowers, Alder Creek Kayak Company and many other paddling and human-powered craft advocates to petition the Oregon State Marine Board to establish a “Slow/No Wake” zone on the Holgate Channel and in the Ross Island Lagoon. After many rancorous hearings, the Marine Board establishes a no-wake zone limiting motorized boats to 5 mph or less in the Ross Island lagoon and on the Holgate Channel from its upstream mouth near the Oregon Yacht Club to the mouth of the Ross Island lagoon.

2009 to present - Portland Parks & Recreation and the Portland Bureau of Environmental Services, along with Willamette Riverkeeper and the Audubon Society of Portland, conduct regular bio-blitzes and restoration work parties.

April 2015 - The Port of Portland donates its holdings to the city as a protected habitat.

Let me understand properly... They donated all 4.7, which erosion reduced to 2.1...acres And, they could have donated it all, like promised, and it would be 100acres of the 450acre island, of which Sand and Gravel still owns, 350acres of the island, with no intentions of restoration, then, or ever...? 2.1 compared to a 450acre area, that no one can really inhabit, anyway....? Hmmmmm.
This article has some gaping holes. First of all, why and how did Pamplin manage to renege on his promise to donate the entire island, and then another promise to donate a good portion of the island? What happened? Second, since Pamplin also owns Pamplin Media (publishers of the right-wing Portland Tribune and several neighborhood newspapers), is the 3rd-wealthiest Oregonian and is on the Forbes 400 list of wealthiest Americans, why doesn't the story make this clear? Surely these facts are relevant? Third, since Pamplin has toyed with the city on giving back this ecological gem which he can no longer use to mine sand/gravel, why hasn't the City used eminent domain to seize the island? Oh wait, I guess #2 answers #3.