In celebration of this week's launch of BIKETOWN, we reprint this Metro article highlighting achievements and advances that have made biking more practical, safe and convenient throughout The Intertwine. 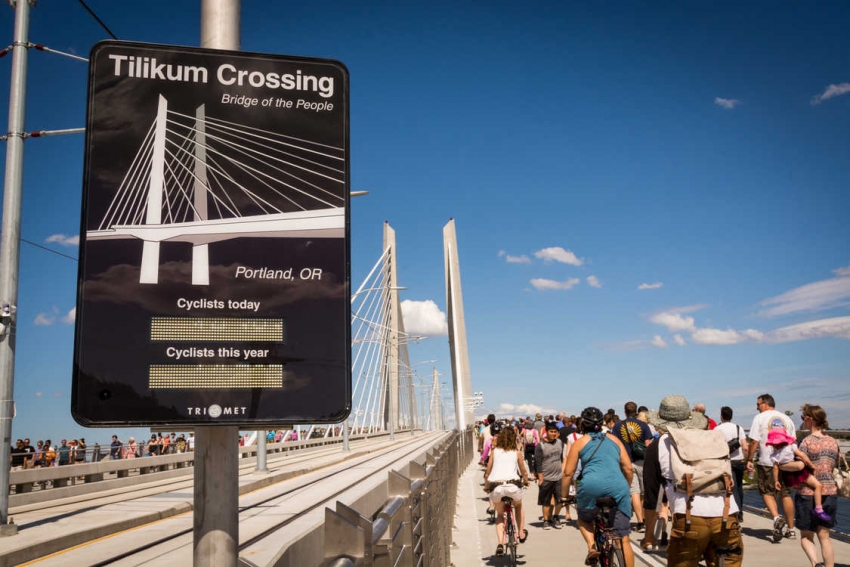 We asked advocates, city and county staff, and people on the street what projects, policies and programs they thought made biking better in their community in 2015.

Floating above the list of improvements is the gigantic investment of TriMet’s MAX Orange Line. The Orange Line brought more than just light rail. It brought the largest one-time investment in biking infrastructure in our region. The project created 7.8 miles of new or replaced bike facilities and intersections, and 446 new bike parking spaces at stations, making it easier to travel from the bustling Westside of the Willamette waterfront to the quiet streets of Oak Grove in Clackamas County.

The crown jewel in the collection of bike amenities along the line is, of course, Tilikum Crossing, Bridge of the People. The first of its kind in the U.S., the 1,720-foot span carries only transit, cyclists and pedestrians.

But a lot happened beyond the Tilikum. Here are 15 other projects, plans and events that rose to the top, organized by county.

What would you add to this list? Join Metro on Twitter to tell us what made biking better for you this year; use the hashtag #betterbiking.

Nothing makes biking better than making biking safer, and there is one contribution from the MAX Orange Line that stood out for greatly improving bike safety. Prior to the new line, Southeast 17th Avenue had no bike lanes, and the vehicle lanes were tight. With limited choices for traveling through the area, only the bravest bike riders dared it. By adding buffered bike lanes plus improved crossings, signalized intersections along the light rail alignment ,and safe crossing over Powell Boulevard, bike riders now have better, safer access through the corridor. 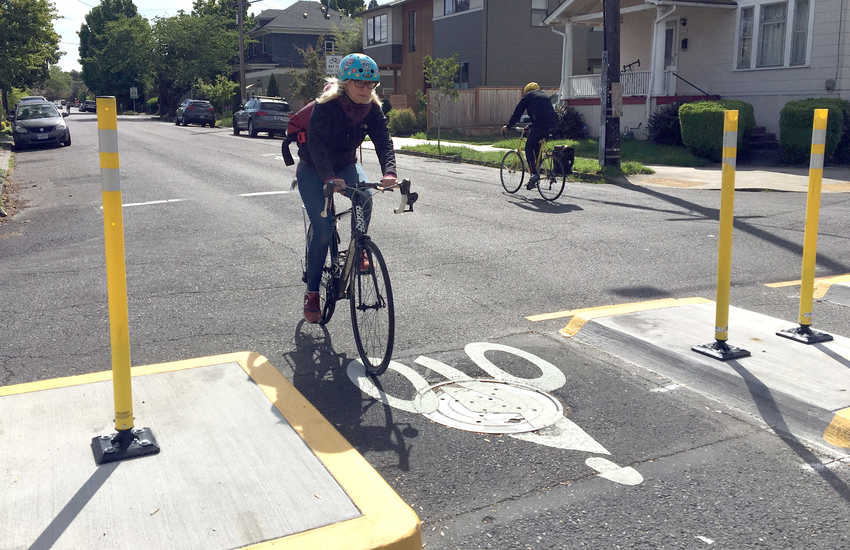 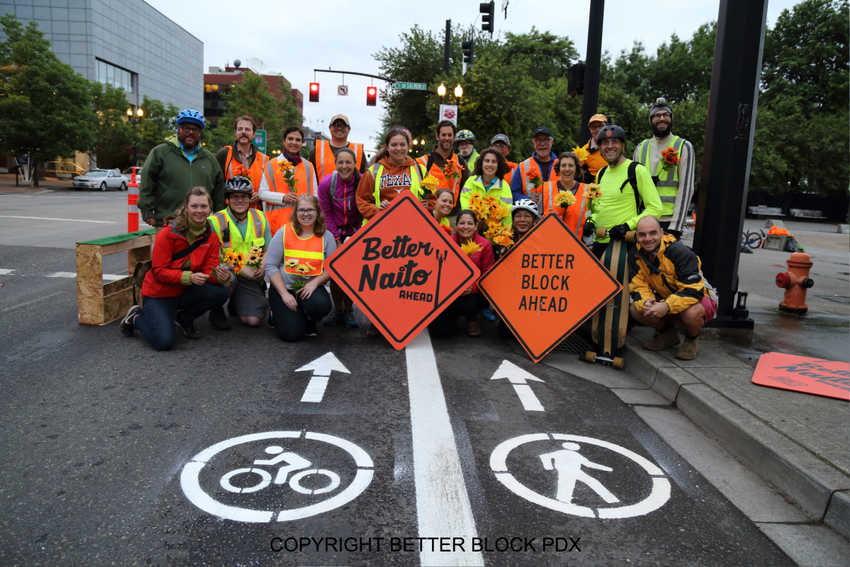 The nonprofit, volunteer group started in 2014 to re-imagine Old Town/Chinatown’s Third Avenue. Partnered with Metro, PBOT, Portland State University and Transportation Commissioner Steve Novick, they redesigned and implemented temporary bike and pedestrian safety improvements on Naito Parkway. A temporary “road diet” was implemented in May along 15 blocks of the roadway. Then there was an "even better" Better Naito in July to help the 85,000 Oregon Brewers Festival travel safer. (Better Naito returned for another run through July, and Better Block plans additional demonstration projects in 2016.) 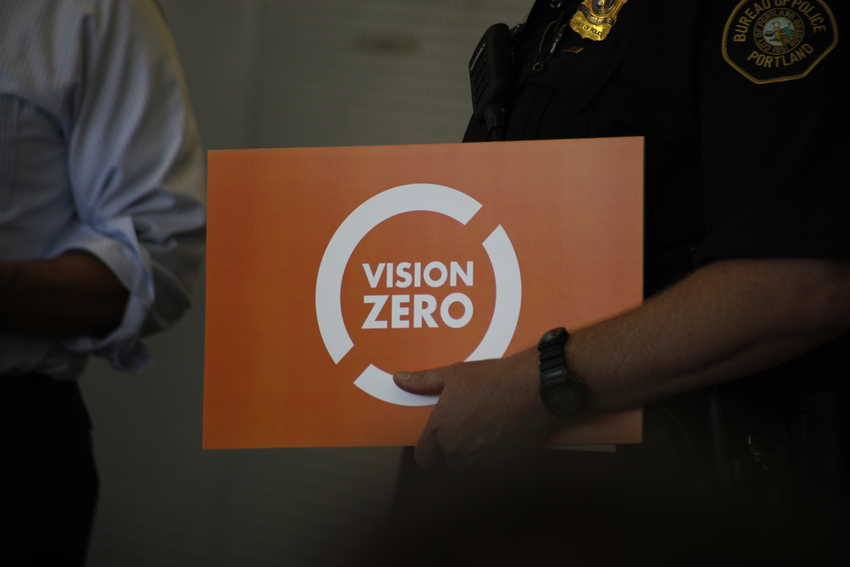 Portland joined cities around the country and the world by adopting Vision Zero in June 2015. The Portland City Council endorsed the vision and accepted $150,000 in grants from the state to help develop a Vision Zero action plan with specific steps to reduce deaths and serious injuries on the city's streets. The plan will take about a year to develop and will outline tasks to perform over two and five years. A spike in road fatalities in the first few months of 2016 have given renewed urgency to the project. 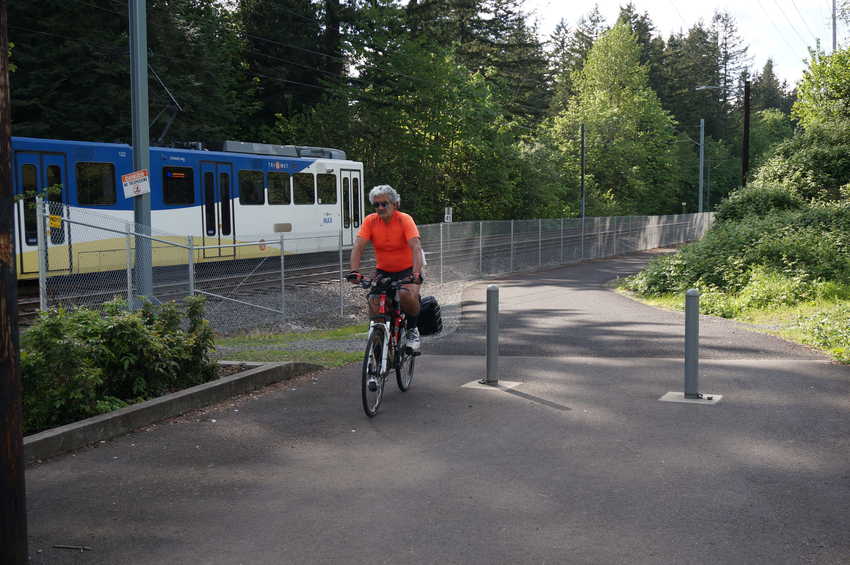 Wy’East Way Path is a new 12-foot wide pedestrian and bicycle path that runs two miles along the MAX Blue  Line from the Cleveland MAX Station in downtown Gresham to Ruby Junction Station in Rockwood. The new path also connects the Gresham/ Fairview and Springwater trails, creating an uninterrupted six-mile loop. A local naming competition was held for the new path, which was known during planning as the MAX Path.

In 2015, the Bicycle Transportation Alliance launched its Women Bike program to encourage more women to use a bike to meet their personal health, fitness and transportation goals. With a full calendar of events, from coffee clubs and happy hours to education and ride events, the program provides a variety of ways for women to meet other women who bike, learn about their bikes, and explore the city together.

Lora Guillotte lives in Portland and has come out to multiple Women Bike events. "I ride with Women Bike to expand my knowledge beyond my commuting routine and to meet other women who enjoy cycling," she said. "I like that the program is open to women of all levels and ages, that it helps beginner cyclists gain confidence, all while building a community of women cyclists who might be overlooked or under-represented in the cycling community at large." 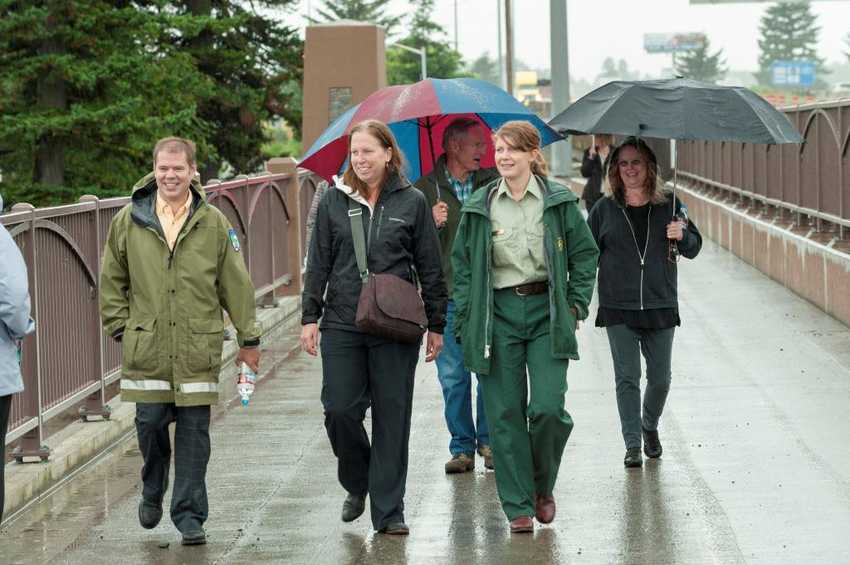 People visit Oregon (and stay) for our scenic biking. The Sandy River Connections bike bridge makes for an inviting new gateway to the Columbia River Gorge. Adjacent to the south side of Interstate 84, the bridge, which actually opened in 2014, connects Troutdale to the east side of the Sandy River and destinations like Cascade Locks via the Historic Columbia River Highway. Eventually, the route will connect bike riders via scenic road and trail all the way to The Dalles. 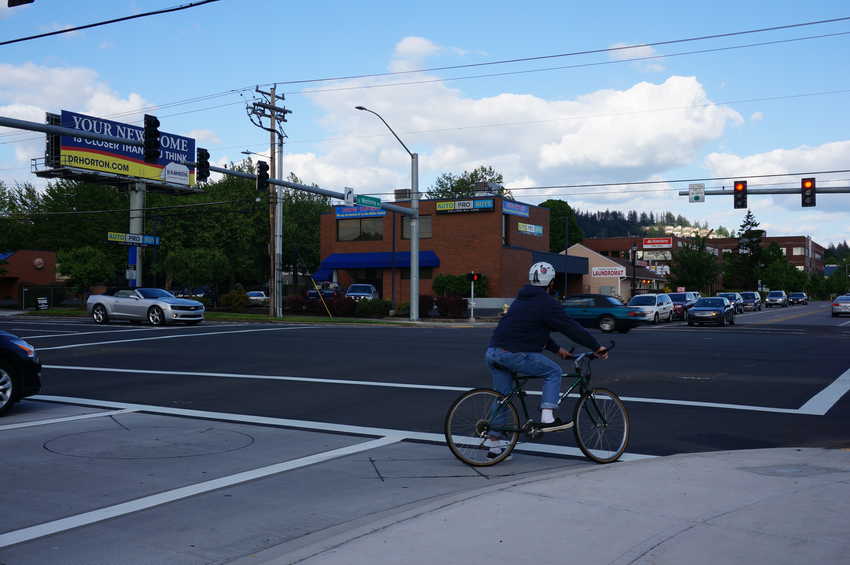 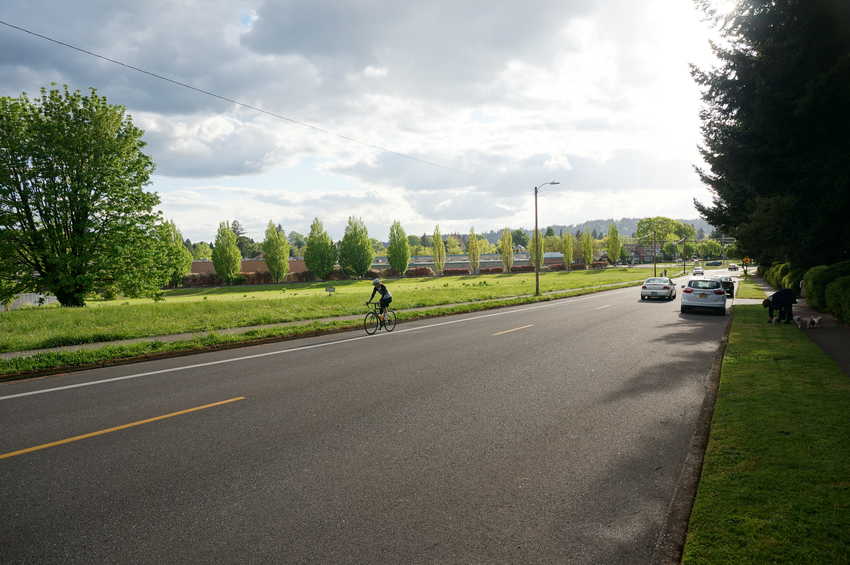 In December 2015, the Milwaukie City Council adopted the Monroe Neighborhood Greenway Concept Plan. “This plan was really driven by the community, unlike other planning projects I've been involved with in the past,” said Bike Milwaukie’s Matt Menely. The idea has been in the city's transportation plan since 2007, but adoption was a reflection of a shift in city leadership, which is placing more importance and value on creating safer connections for people walking and biking in Milwaukie from east to west. City staff now have the job of moving the project forward by finding grants to help with engineering and construction. 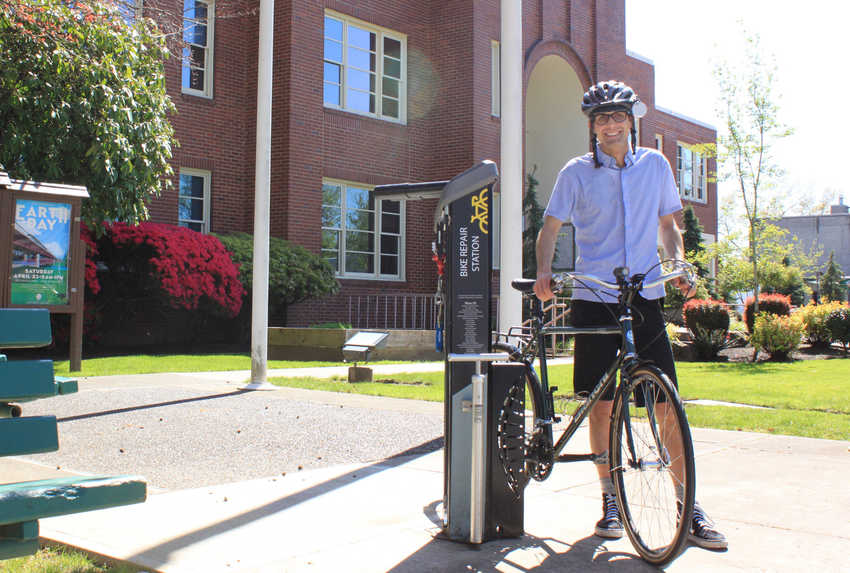 Bike Milwaukie also led the charge of community crowd funding and installing the Public Bike Repair Station in front of Milwaukie City Hall. “It makes a bold statement that as a community we are starting to place more value on cycling infrastructure, and it gives folks access to tools 24 hours per day in a community that has no bike shop," Menely said. More good news is coming for Milwaukie -- see the "What's next" section of this story for details.

The Sunrise Highway improvement project, headed by ODOT and Clackamas County, will add safer bicycling pathways through the busy Southeast 122nd to 82nd Avenue corridor with a shared-use path along the new highway, and two options for separated travel over Interstate 205. 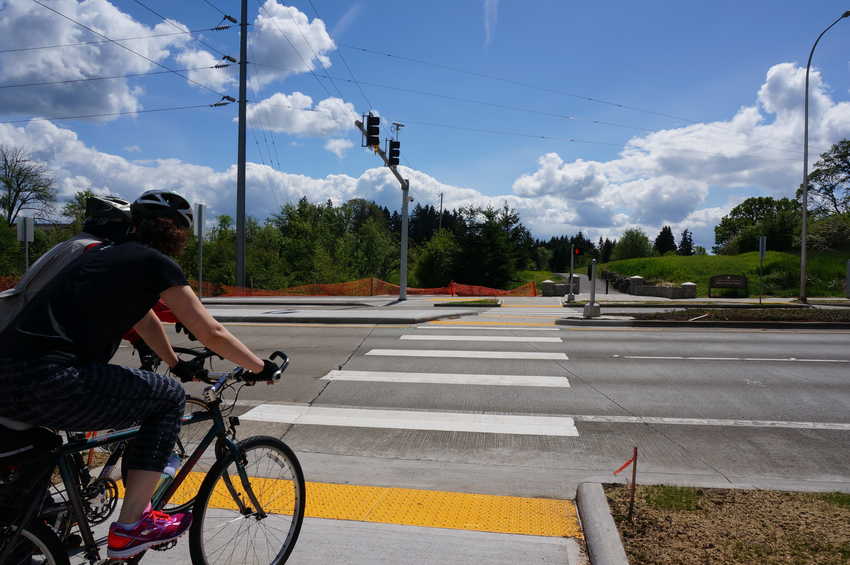 In Washington County, a new mid-block crossing signal was recently turned on at Southwest Cornell Road and the Rock Creek Trail. Managed by Hillsboro Parks & Recreation, the 5-mile trail is an important commuting and recreation route that meanders through many northern Washington County neighborhoods.  The signal overcame one of the last crossing barriers for users accessing the trail from the south, providing a more direct connection for neighborhoods north of Sunset Highway to just a short ride to the Quatama/NW 205th Ave MAX station. The installation also includes a permanent bike-counting station on both the trail and in the bike lane on Cornell. 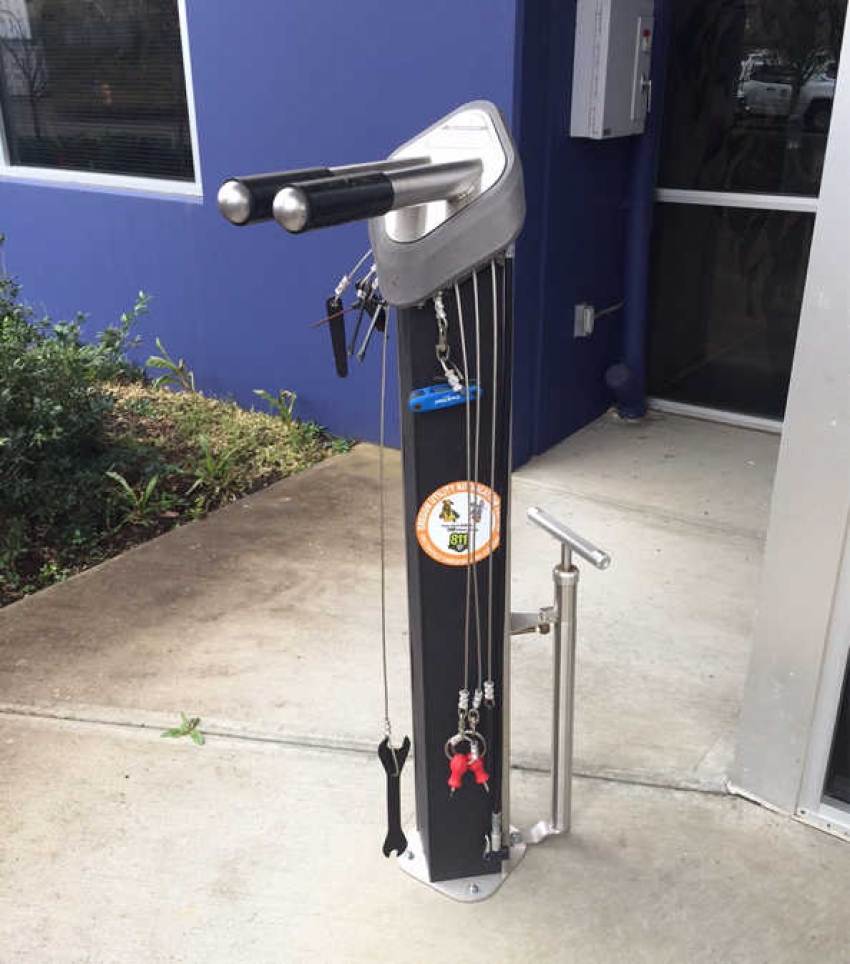 In places where bike shops are few and far between, a bike repair station can be a reassuring resource for people getting around by bike. To help riders out, the Westside Transportation Alliance put together a map of the 12 bike fix-it stations in Washington County, including the station in front of the Hillsboro Main Public Library. 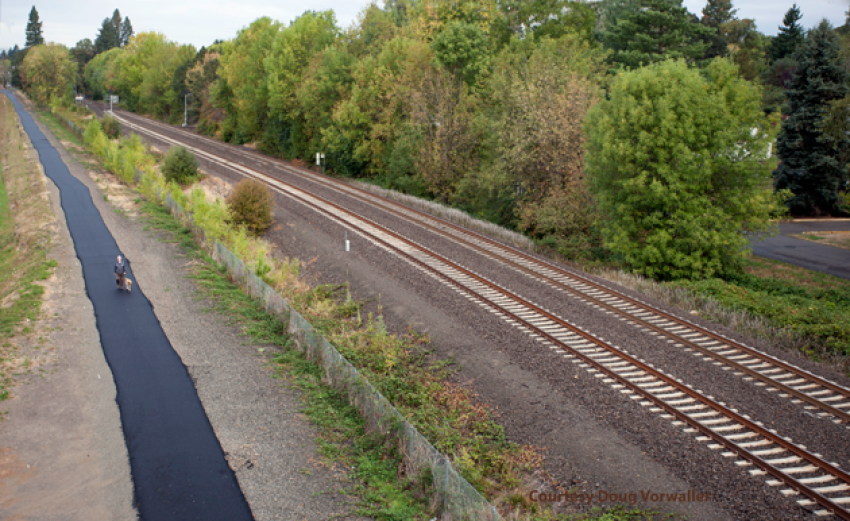 As part of the city of Tigard’s set of Lighter, Quicker, Cheaper projects, the Tigard Street Trail is a new biking and pedestrian corridor with access to the city's downtown core, and also provides a safer route to cross Highway 99W. The .75-mile asphalt path runs along an abandoned railroad right-of-way adjacent to Tigard Street from Tiedeman Avenue to Main Street. 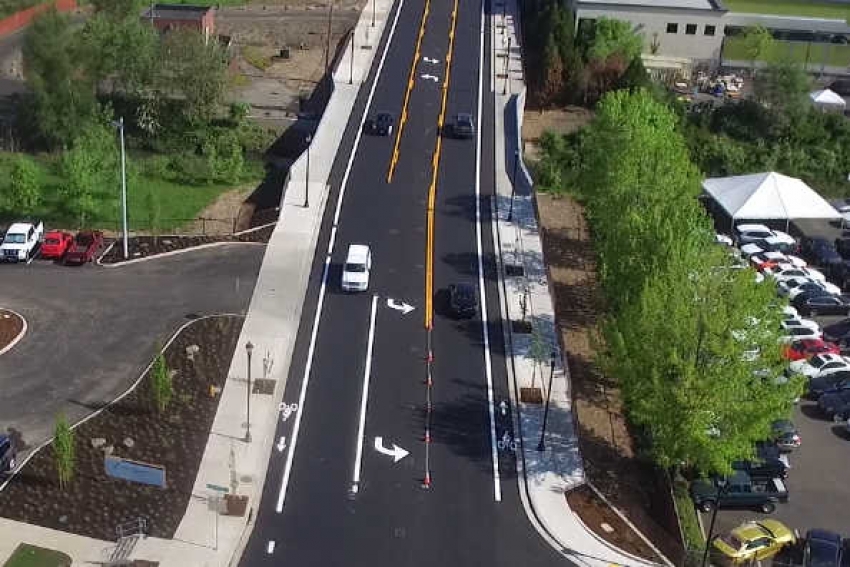 A major north-south alternative to Cedar Hills Boulevard in Beaverton, Hocken Avenue had no sidewalks, bike lanes or lighting near the Cedar Hills Crossing shopping center. Last year Washington County installed 5-foot bike lanes and 9.5-foot sidewalks on each side of the street, as well as flood control improvements for Beaverton Creek. The project gives people who are walking and biking safer access to the Cedar Hills Crossing shopping center, downtown Beaverton and major employment areas.

Making better places for biking is ongoing work. The coming year will have its share of exciting and transformative additions. Here are some things we can look forward to before 2017.

What would you add to this list? Join Metro on Twitter to tell us what has made biking better for you this year; use the hashtag #betterbiking.

Find tips and routes for bicycling in your community.

​Marne Duke works for Metro promoting walking, biking, taking transit and ride sharing in the Portland region. A relatively recent Oregonian, Marne grew up in Ohio and California, but spent much of her adult life in Nashville, Tennessee, where she worked for the city promoting healthy eating and active living. When not tinkering in her garden, she is out discovering mountain lakes and placid rivers to explore by kayak with her husband, son and dog.

The man pictured does not have a helmet. I believe all media should promote helmet use even for adults.
Thank you for commenting, Karen. You are exactly right! We apologize for including an image that sends the wrong message.