The 2013 Force of Nature Awards

Winners of the first-annual Intertwine Force of Nature Awards 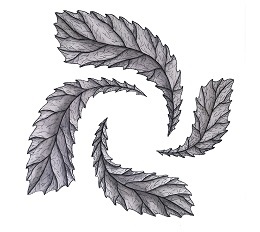 October 9, 2013 | Oregon Zoo -- The Intertwine Alliance’s 2013 Fall Summit was enlivened by the debut of the first-ever Force of Nature Awards. Recognizing vital organizations, important regional projects, and outstanding individual efforts, the awards spotlighted successes across the 3,00-square-mile ecological region known as The Intertwine.

Nominated by Alliance partners and chosen by an advisory committee of organizational peers, the seven awardees represented people and places from Washington State's Clark County to the Tualatin River.

“The Portland/Vancouver region is recognized as a national leader in the urban greenspaces movement, but the passionate people who have built that reputation all too often go uncredited. With the first ever Force of Nature awards, we shine a spotlight on these behind-the-scenes champions," said Mike Wetter, Executive Director of The Intertwine Alliance.

In addition to awards for Outstanding Organization, Outstanding Project, and Outstanding Young Professional, two lifetime achievement awards were also granted at the afternoon event -- to Lu Beck and Linda Robinson, leaders whose impact on the region’s environmental movement goes back decades.

The following groups and individual were recognized (see below for details):

The Intertwine Alliance is a coalition of 100+ non-profits, government agencies and for-profit entities working to expand and nurture our region’s parks, trails, and natural areas. Founded officially in 2011, the Alliance represents groups in Multnomah, Washington, Clackamas and Clark Counties and is one of six regional coalitions working at this scale and scope within the United States.

The 2013 Force of Nature Awardees:

Founded in 1999, the mission of the Foundation is to raise funds through public and private partnerships in support of the parks, trails, and recreational programs throughout the county. The foundation accomplishes its mission by creating and nurturing innovative partnerships, administering strategic grants, and establishing special funds to enhance the parks, trails, and recreational programs. The Foundation serves as a resource and network to the individual groups and organizations by providing annual funding to the cities of Clark County through its Community Grant program. This program, started in 2009, has provided $239,900 in support of projects. The Foundation also accepts monies for Special Projects Funds for broader general purposes that enhance or support parks, trails, and/or recreational programs of Clark County.

The Tualatin Riverkeepers remains the leading independent voice advocating for the river, streams and wetlands in this important watershed. Their vision is that people and their communities will discover, enjoy, value and contribute to a healthy watershed. A non-profit started in 1993, the Tualatin Riverkeepers does much more than organize conservation efforts throughout the region. Last year alone over 500 volunteers contributed 10,000 hours to their projects including not only habitat restoration, but also nature education, paddle trips and most importantly, advocacy. In addition they annually organize a river paddle for elected officials, helping them to better understand the need for protecting and preserving our imperiled natural areas.

Six years ago, the City of Portland Bureau of Transportation launched this wildly popular program that now is enjoyed by 100,000 plus participants each year in neighborhoods all over the city. The program fosters civic pride, stimulates economic development and represents community business and government investments in Portland's vitality, livability and diversity. The program is an innovative and unique approach to encouraging people not likely to be current "active transportation users" to get back on their bicycles and remember how much they loved it. Not only does Sunday Parkways show off the network of bikeable and walkable streets as part of the Intertwine in the region, each event is anchored by three or four parks or open spaces with physical activities, market places and food vendors that participants and neighbors can discover.

A New Forest Grows – the I-205 Project (Friends of Trees) 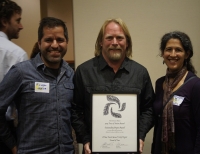 April 2013 marked completion of the Friends of Trees’ largest planting project ever—the 16-mile long “A New Forest Grows” project along the I-205 Multi-Use Path from Airport Way at the Columbia River to Dean Creek in Clackamas County. Through 46 planting events over four planting seasons, FOT worked with over 1800 community volunteers to plant nearly 5000 trees along the path. Primary objectives for the project were to provide shade for path users and to buffer the freeway for neighbor residents. This new “inner city forest” will also help filter air pollution, lower the urban heat island effect, serve as a carbon sink, and provide increased habitat connectivity. The increased number of users that the trees attract will also lead to healthier and safer communities. Funding for this project was leveraged from multiple sources, with the primary funders being Metro, Oregon Department of Transportation, and East Multnomah Soil & Water Conservation District. However, dozens of other partners were also paramount to its success, including Verde, Portland Opportunities Industrialization Center, J Frank Schmidt & Sons Nursery, REI, and dozens more local businesses and community groups.

Alexa just completed her third year as the Volunteer Service Coordinator (VSC) for the Friends of Mt. Tabor Park Weed Warriors. She has helped the volunteer numbers of the Weed Warriors grow significantly and, as a result, has been able to clear a huge amount of invasive species from specific problem areas in Mt Tabor Park. Due to the success of these efforts the Weed Warriors were able to plant 1700 native species last Oct. and Jan. Due to Alexa’s leadership and collaboration abilities the FMTP Weed Warriors received the Sandy Diedrich Environmental Stewardship Award in October 2013, one of the Spirit of Portland Awards given by the City of Portland. Her list of accomplishments include: improving the organization’s overall volunteer numbers as well as retention; designing and achieving multi-partner funding for the first ever Mt Tabor Park Native Plant Guide; mapping out specific service project sites detailing locations of natives vs. invasives and planning for those projects; creating a Facebook page for the FMTP Weed Warriors; making significant contributions to the development of the first ever Weed Warrior crew leader handbook; and planning/ participating in their crew leader training program.

In the late 1960s Lucille Beck became intimately involved with the effort to protect Tryon Creek in SW Portland and Lake Oswego. Along with Jean Siddall they formed a community non-profit, the Friends of Tryon Creek Park, in 1970 just as a large housing development was being planned for the area. Over the next several months they furiously instigated a grassroots campaign to build local public support for the creation of a park. Money was raised to help purchase land and an onslaught of media coverage and public meetings eventually led the State to get involved and acquire the land and create Tryon Creek State Park which was dedicated in 1975. The notion that a couple of community members could organize such a grassroots bottom up campaign was unheard of in those days, but she and Jean were wildly successful and set the bar for all future advocacy efforts in our region. Lu has continued to serve on the Board of the Friends ever since and has been instrumental in the continuing and evolving vision for the park, the development of the Nature Center, organizing volunteer trail-building parties, acquisition of additional lands into the park, and ongoing fundraising. For many years she also served on the Oregon State Parks Commission and was also a founding member of the Oregon State Parks Trust. Along with many awards and recognition over the years, the Friends of Tryon Creek launched their first annual “Lu Beck Membership Drive” in her honor this past spring. Without her engagement and guidance there is no doubt that Tryon Creek would not be what it is today. 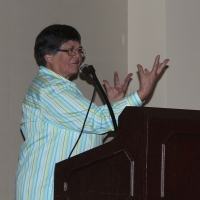 Linda Robinson is known far and wide for her advocacy around Gateway Green, a project to create a world-class off-road bicycling center, wildlife habitat restoration, and innovative stormwater management program north of the Gateway transit center.  But, that's only her most recent effort to expand The Intertwine.  She has been engaged in The Intertwine for at least twenty-five years before there was an Intertwine.  Working with Steve Johnson, Mary Rose Navarro and Ron Carley out of Portland State University, Linda helped compile the first ever directory of park, trail, and natural area advocates in the Portland metropolitan region.  The FAUNA (Friends and Advocates of Urban Natural Areas) directory allowed advocates to contact one another as well as providing a regional database to rally citizens and nonprofits to help adopt the Metropolitan Greenspaces Master Plan adopted by Metro Council in 1992.  She was actively engaged in the first ever regional bond measure in 1992.  Linda has also been actively engaged in efforts to protect and restore fish and wildlife habitat in the Columbia Slough.  She and her fellow advocate Alice Blatt have fought for more than twenty years to bring parks, trails and natural areas to Northeast Portland generally and the Cully neighborhood specifically. Alice's contributions to what has become The Intertwine and The Intertwine Alliance has truly been a lifetime commitment.