Cycling the city on a cool August day

Yes, Washington D.C. now has twice as many miles of protected bike lanes as Portland.

Birmingham, Ala. -- not the Rose City -- launches bike sharing in September.

And Minneapolis? When it comes to cycling, says Steve Durrant, a senior landscape architect at Alta Planning + Design in Seattle, "Minneapolis completely puts (Portland) to shame." 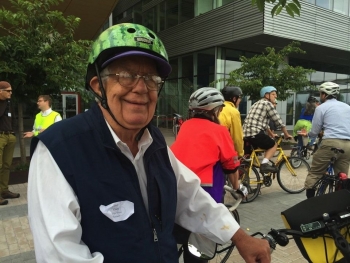 Resting on our laurels? Perhaps. But on the coolest day in August, Cycle Oregon and The Intertwine Alliance took almost 200 of the area's "policy makers" on a rousing tour of those laurels, a 15-mile ride that former Mayor Bud Clark summed up rather well:

"I'm old," says Clark, 83, armed with a Kalkhoff E-Bike and a Nutcase watermelon helmet, "and in awe of the situation."

Clark was aboard for the first policy maker ride; Durrant helped plan that 2005 slog from the Hawthorne Bridge to Champoeg State Park. "It was a good, bad and ugly ride, and there was a lot of ugly," Durrant said Friday during a break for lemonade at the Lucky Lab. "There were so many roads that were hostile."

The 11th annual odyssey was far more accommodating for the peloton of bike advocates, city planners, transportation strategists and networking entrepreneurs. From the Moda Center, the ride looped through North Williams, the Pearl, the North Park Blocks and South Waterfront, before a memorable stop at the watershed restoration project at Westmoreland Park and the turn home on the Springwater Corridor. 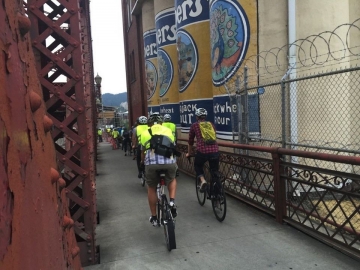 From the beginning, the ride has been designed to connect the dots between what's on the ground, what's in the works, and what's on the visionary drawing board for cycling and alternative transportation.

The emblematic apex of the 2015 ride was Tilikum Crossing. No corner of the city is better designed than South Waterfront for the ebb and flow of buses, cyclists and pedestrians, a mix that will only intensify when the striking 1,700-span over the Willamette River opens Sept. 12.

It's "a symbol of what you have been working for all these years," Rep. Earl Blumenauer, D-Ore., told the crowd at the Moda Center. He then added:

"When we cut the ribbon on that bridge, it will be the first time in 50 years that we don't have a major federal project in the pipeline."

For the foreseeable future, the city is largely on its own. Congress can't find the means to maintain the bridges and highways collapsing beneath the weight of trucks and cars, and too few of its hostile policy makers were along for Friday's showcase of the urban alternatives. 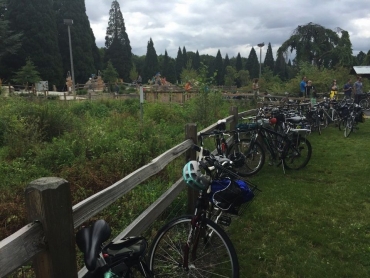 The ride illuminated the work that remains to be done on the Willamette's west bank. North Williams is one of the city's busiest commuting corridors, and 40 percent of the traffic during rush hour now pedals in the cycling "superhighway."

The increasingly frantic desire to live three blocks off Southeast Division Street may owe as much to the ease of cycling through the adjacent neighborhoods as it does to Bar Avignon and Ava Gene's. When Rich Fein arrived from Akron, Ohio, 18 months ago, he opened Cynergy E-Bikes at Southeast 39th and Powell: "If you're going to sell bikes," he says, "where else would you go?"

But the central city is harder to negotiate. Ian Stude, the director of transportation and parking at Portland State University, said there's a simple reason why so many of the students who could bike to the urban campus don't: 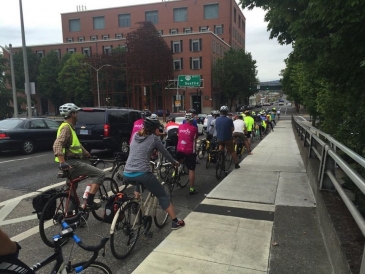 "It's not convenient. It's not intuitive. And it's not safe," Stude says. "The solution is far more about commitment and politics than engineering. When we look at this public space, what do we choose to prioritize? We've prioritized movement over safety."

Small adjustments are in the works.  The Portland Bureau of Transportation is still deciding how to best spend $6 million in multimodal funds. The "Green Loop," a 6-mile "active-transportation" park, may yet bring better cycling access to the pedestrian-friendly Park Blocks.

"When you move through the central city on a bike, it changes your experience with the city," Stude said. And that's an experience eagerly sought by the thousands of people who -- the aggressive bike cultures in Minneapolis, Birmingham and the nation's capitol notwithstanding -- are Portland-bound.

Reprinted with permission of The Oregonian.

Steve Duin is The Oregonian's Metro columnist. He is the author/co-author of six books, including "Comics: Between the Panels," a history of comics; "Father Time," a collection of his columns on family and fatherhood; and a graphic novel, "Oil and Water." His last name, for inexplicable reasons, is pronounced "Dean." Blog: www.oregonlive.com/duin​. This column is reprinted from the 8/15/2015 Oregonian, with permission of the author.