Update on design and community engagement at Willamette Falls

By Dave Elkin and Christina Robertson-Gardiner, May 24 2016 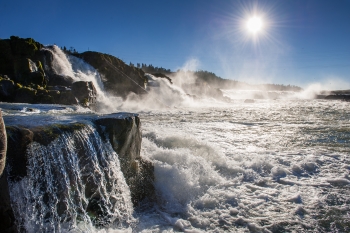 It is a place of immense importance for the Native American tribes who have been fishing and gathering there since time immemorial. And for any visitor, the opportunity to draw close to these falls is truly an unforgettable experience.

As the Willamette Falls Legacy Project enters its fourth year, a growing cascade of stakeholders, supporters and interested residents have much to be enthusiastic about. Design is now underway for a public riverwalk that will allow 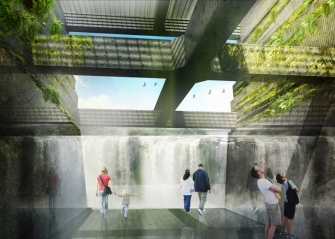 visitors to experience the falls for themselves, while acting as a catalyst to transform a site crowded with abandoned buildings and equipment into a bustling, vibrant, and modern mixed-use development including arts, culture, dining and entertainment. The riverwalk will honor and incorporate elements of the past while aiming squarely for the future as a top Pacific Northwest destination.

Project efforts are evaluated through the lens of four core values established in the early days of project development: historic and cultural interpretation, public access, healthy habitat and economic redevelopment. 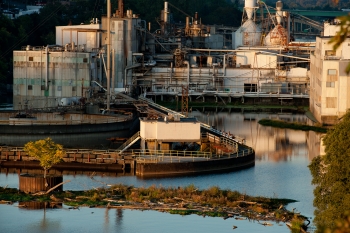 Blue Heron Paper Co. was the last business to operate a mill on the 22-acre Willamette Falls Legacy Project site, which runs along the Willamette River in downtown Oregon City. After the paper mill closed in 2011, the site and its contents went into federal bankruptcy.

Recognizing it as a once-in-a-lifetime opportunity to secure public access to Willamette Falls, four government partners – Oregon City, Clackamas County, Metro and the State of Oregon – came together as the Willamette Falls Legacy Project to create a vision and master plan for site transformation. This included plans for a waterfront walkway to view Willamette Falls and the framework for a public-private development strategy to assist any private landowner that might acquire the site during bankruptcy.

The vision and master plan, which rezoned the site from industrial to mixed use, was approved by Oregon City in 2014; the same year, the site was purchased by Falls Legacy LLC, a private land developer.

While the Willamette Falls Legacy Project means many things to many diverse stakeholders, it centers on two tightly intertwined but separate initiatives, each critical to the success of the other: the creation of an overall development strategy for the entire 22-acre site, which is privately owned by Falls Legacy LLC, and the design and construction of a public riverwalk on a portion of the site, through an easement granted by Falls Legacy LLC. The project partners have also been granted an option for an easement from Portland General Electric, which owns the dam on the site. 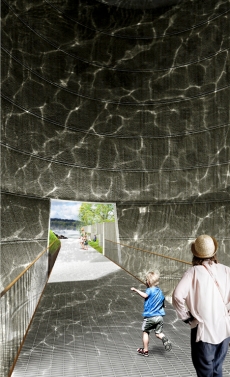 The riverwalk is the high-profile, public access project that has captivated the imagination of thousands of enthusiastic supporters, and it is what most community members think of as the Willamette Falls Legacy Project. The riverwalk will reconnect historic downtown Oregon City to Willamette Falls, and it has been the focus of the project’s community engagement efforts. While many people think of the riverwalk as a “government-funded” project, the reality is that fundraising is ongoing, with just over $19 million raised, and project partners will be actively seeking outside support.

The riverwalk is being designed by Snøhetta, Mayer/Reed and DIALOG, the world-class design collective chosen last year from among more than a dozen highly competitive proposals. The same design collective is also working with the development strategy team, because it is so important for riverwalk design and the development strategy to be considered in tandem.

The development strategy for the overall 22-acre project site is a public-private effort. Falls Legacy LLC and the Willamette Falls Legacy Project partners have agreed that work on the development strategy should be completed concurrently and carefully integrated with the riverwalk design. While we believe Willamette Falls is poised to emerge as a national landmark, there are significant challenges to overcome at the site, including inadequate infrastructure and local market conditions. The next necessary step to spur private investment at Willamette Falls is eliminating some of these challenges. The goal is to take a multitude of factors into consideration in producing a strategy for development, streets, utilities, parking, open spaces and interim uses – with the construction of a world-class public riverwalk as a catalyst for private development. 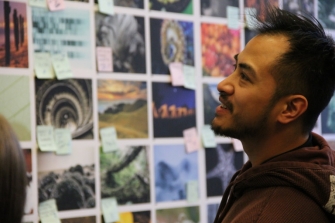 In March and April, the design collective hosted several community engagement activities to kick off the riverwalk’s design phase by investigating what people want to do and experience. The open house in Oregon City drew a crowd of over 800 people, and hundreds more participated in online surveys and activities that were open to the public.

One popular in-person and online activity was the opportunity for participants to select three images that inspired them when thinking of the riverwalk, and one image that represented a concern or worry for the project. The images associated with the most positive and most negative reactions are shown below, along with a word cloud representing the various words people chose to describe the images they selected as positive; the larger the word, the more times it was used.

A summary of open house results is posted here.

The project’s four core values will continue to be the foundation for all work on the riverwalk and development strategy. Designers will also consider the ideas and aspirations of thousands of people who have shared them over the course of many community events and surveys. This community input will help guide the design collective as it explores design opportunities that respect the diverse context and unique history of the site, and capture authentic and meaningful experiences that are true to this special place. 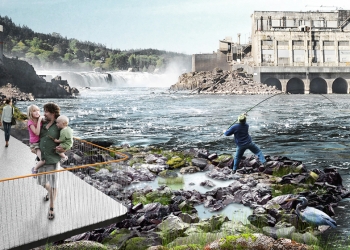 It will also help us identify the main points of interest, concerns that may need to be addressed, and areas where the community may have conflicting points of view. This will allow the team to actively resolve contradiction as part of the process.

Continued opportunities for public involvement are being planned as riverwalk design proceeds, including a few this summer. Stop by our booth at Oregon City’s First City Celebration on Saturday, July 23, 2016! We invite you to join the Willamette Falls Legacy Project mailing list and stay up to date on events and milestones at rediscoverthefalls.com.

For those of you who would like to catch a glimpse of Willamette Falls now: by car, people can see Willamette Falls from a viewpoint along Highway 99E in Oregon City and another viewpoint on I-205 northbound. Pedestrians can take in the falls along McLoughlin Promenade in Oregon City, and from the Museum of the Oregon Territory. And of course, people on watercraft can view the falls from downstream in the Willamette River. 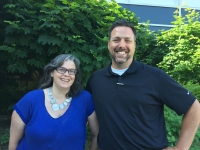 Dave Elkin has been a principal parks planner with Metro since 2014. He is the project manager for the Willamette Falls riverwalk. Dave is a licensed landscape architect in the state of Oregon with 17 years of experience and holds a B.A. from the University of Oregon. He grew up skimboarding and swimming with lamprey on the American River in California.

Christina Robertson-Gardiner has been a planner with the City of Oregon City for 14 years. She is the project manager for development strategy for the Willamette Falls Legacy Project. Christina holds a Master’s Degree in Urban and Regional Planning from Portland State University, a Bachelor of Arts Degree from Willamette University and is a member of the American Institute of Certified Planners. Her second favorite waterfall after Willamette Falls is Oneonta Falls in the Columbia River Gorge.

Actually according to the World Waterfall Database, Willamette Falls is 11th by volume in North America (not including falls inundated by dams), behind Niagara, Vermilion, Virginia, Great, Kootenai, Alexandra, Louise, Sandstone, Rearguard, and Cohoes falls. Though I think you are correct it is the largest by volume in the PNW. :) http://www.worldwaterfalldatabase.com/largest-waterfalls/volume/
That's not to say that 11th largest is not impressive! I'm really looking forward to this project and having access to the falls. :)
Where do the locks play a part in this project?